Deschutes and Harpoon have teamed up to brew EHOP, a hearty amber ale!

Deschutes and Harpoon are ESOP (Employee Stock Ownership Plan) breweries meaning they are locally owned by the workers, not some faceless large corporation.

EHOP relates to employee grown hops.  The same employees that own the brewery are also growing hops so it’s another level of Vermont-ness you’re supporting when you buy this delicious beer.

EHOP is great beer for fall – it’s inviting deep hue matches VT’s amazing foliage, the warming robust maltiness is perfect for those who want a seasonal beer but don’t want an Oktoberfest or pumpkin beer.

Get this one while you can and share with friends during Halloween or stock up and save some for Thanksgiving!

There are so many reasons to buy and enjoy EHOP, you may want to try a beer with a Deschutes connection, you may want to support an important VT brewery, or you just may want a tasty seasonal beer.  No reason is wrong for you to pop in and grab a bottle of EHOP while available!

It was a little over a year ago at this time that Harpoon became an employee-owned brewery. It was an exciting time – and somewhat overwhelming. What does employee ownership mean and how will it affect the way we work? How will things change at the brewery? Can we finally purchase that Jetstream we’ve always wanted? (The answer to that last question is “no”).

Thankfully, we had friends who had gone down the Employee Ownership path before us. After news broke of the Harpoon ESOP (Employee Stock Ownership Plan), our friends and fellow brewery employee-owners at the Deschutes Brewery were among the first to reach out and welcome us to the club. They became an invaluable resource for us as we began to navigate our way into the new world of employee ownership.

It didn’t take long for us to decide to brew a beer together. And that’s just what we’re doing here today. Deschutes brewer Ryan Schmiege traveled to Boston from Bend, OR to join Harpoon brewer Ethan Elston in brewing this collaboration; a beer that celebrates employee ownership and brewing independence. We’re not ready to give all the details away quite yet – but if you guessed that the recipe might contain employee-grown hops and local spices, you just may be on to something… In any event, we couldn’t let today pass without letting you all know about this great collaboration that’s brewing as we speak.

In 2014 we became employee owned and our friends from Deschutes Brewery were among the first to welcome us to the ESOP (Employee Stock Ownership Plan) club. They became an invaluable resource for us as we began to navigate our way into the new world of employee ownership. As you can imagine, it didn’t take long for us to decide to brew a beer together.

Two versions of the EHOP beer will be released: one brewed at our brewery in Boston and the other brewed at Deschutes in Bend, Oregon. Harpoon brewer Ethan Elston and Deschutes brewer Ryan Schmiege collaborated on both recipes. While each beer is unique, both recipes include employee-grown hops (EHOPs). The hops, along with locally sourced sage and thyme, create a full bodied amber ale that has a malty sweetness and a lingering spiciness. Both versions will be bottled and kegged for a release in Mid-Late October. Cheers to craft brewing independence!

Come get it while you can and try one of the newest additions to the VT bottled beer scene.

prices do not include VT state tax/deposit.

We’re pulling out all the stops this weekend with a mega drop of VT brews the masses salivate and search for!

Starting at 9:30a, we are dropping a VT beer bomb on y’all and we’ll be having delicious randomness throughout the day in addition to a fresh Frost Beer tasting this afternoon.

Limits are per of consumption age customer, prices do not include VT tax/dep.

It’s raining outside but it just got a bit brighter at the Bevie with the arrival of Lawson’s! 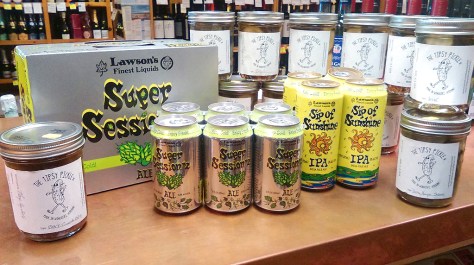 Limits are per person of consumption age,
prices do not include VT tax/deposit.

Because this is in such limited supply, we’re putting it out at 1 bottle per person to share it with as many people as possible.

A strong Belgian ale brewed with carrots, cinnamon, raisins, and vanilla beans that won’t last long for sure so get yours as soon as possible.

24 Carrot Cale Ale just came in moments ago so we can’t tell you precisely how it tastes so below is information pulled off of: http://www.stonebrewing.com/collab/24carrot/

2015 marked the seventh year of our American Homebrewers Association-sanctioned Stone Homebrew Competition. Juli Goldenberg, this year’s winner, added carrots, raisins, cinnamon and more to a Belgian-style golden strong ale to create a beer that is the liquid embodiment of carrot cake.

As the name implies, this beer is richly aromatic and envelopes the palate with decadent flavors of cream cheese frosting, cinnamon, vanilla, carrots and raisins plus subtle malt sweetness, ending with a medium-dry finish. It’s nothing short of brilliant and well deserving of the 24 karat (carrot?) golden opportunity to be brewed by Stone and distributed across the country.